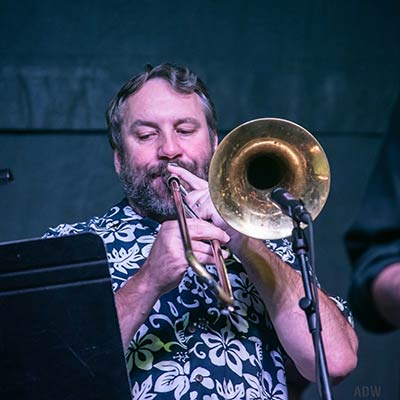 After graduating high school, Sean began a 6 year career in the Australian Army Band Corps.  Upon leaving the Army, Sean completed his undergraduate degree in Jazz Trombone performance at the Sydney Conservatorium of Music.  Sean freelanced around Sydney for the next few years before accepting a contract with Princess Cruise Lines.  The next two years or so were spent traveling the world playing on a cruise ship.  During this time, he met his wife to be who coincidentally came from the same town that Sean had been looking at for graduate work! Sean completed his Masters in Music Education at the Eastman School of Music in 2005.  He has been a full time music teacher in the Rush-Henrietta Central School District since December 2002.  Currently Sean freelances around Rochester as much as his work schedule allows.  He can be heard performing with “Al Chez and the Brothers of Funk” as well as the “Fairport Canal Authority”.