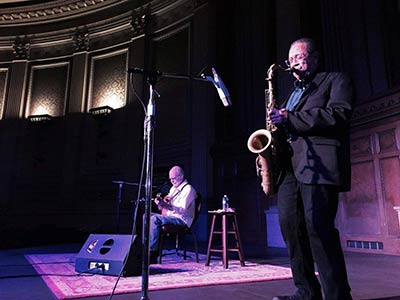 As a child, Jim Richmond entertained the neighborhood kids by imitating Elvis on his front porch.  After listening to his father's gospel group rehearse weekly in their living room and at the urging of his mother, he was inspired to take up the saxophone.  While still in high school, he led his own band, The Echomen, and then went on to major in music at SUNY Fredonia.  Sugar Hill signed his band, Mother Freedom, in the late 70s and released one album.  Like his sax playing, Jim's serious vocal, songwriting, and arranging talents have kept him in demand over the years.

He's written songs with people like Kim Stone from the Rippingtons and former Spyro Gyra member Chet Catallo, performed on national commercials for such clients as Buick, was hired by Disney to be the singing voice of “Munch” at Chucky Cheese’s throughout the country, and shared the stage with world-renowned acts including Tower of Power and George Benson.  He’s been hired by and performed with The Temptations and the Four Tops, former Foreigner lead vocalist Lou Gramm, and former Rascals guitarist Gene Cornish.  Jim also wrote many of the songs, as well as horn and vocal arrangements for Prime Time Funk's CDs "Ready and Willing" and "Hear and Now".  In addition to being music director for his church, he is also the music director for the Rochester Music Hall of Fame’s annual Induction Ceremony at Eastman Theater.